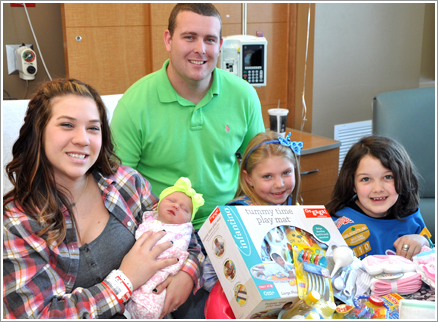 Pictured are mom, dad and baby as well as Girl Scouts Caitlyn Trail and Jocelyn Kriete of Troop 410.

NORMAN, OK - April 3, 2017 - A newborn girl has been named an Honorary Girl Scout at Norman Regional’s HealthPlex hospital. The Girl Scouts of Western Oklahoma name one girl born during the week of March 12-18 as an honorary girl scout.

Juliette "Daisy" Gordon Low assembled the first Girl Scout meeting in Savannah, Georgia during the second week of March. She believed that all girls should be given the opportunity to develop physically, mentally and spiritually. In honor of "Daisy," the local Girl Scouts bestowed hundreds of dollars’ worth of gifts to the little scout so she will "Be Prepared" for her future in the Sooner state.