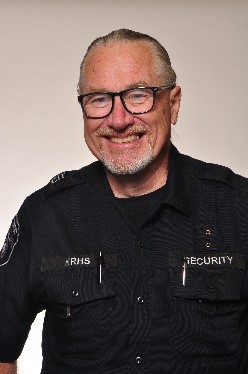 Todd Droscher has been a Security officer with Norman Regional Health System for 16 years and has consistently brought the same hard-working, diligent and honest demeanor since his hiring date in 2005. The winner of numerous awards at Norman Regional, recognizing him for his willingness to go the extra mile, Todd went above and beyond once again. This time with a lost card he found that contained several hundred dollars.

The card was found blowing in the wind in the main lot of the Norman Regional HealthPlex. Todd found the card as he was patrolling the lot clearing trash and making the area look more presentable to patients and visitors.

“Normally people patrol the lot on something motorized, but Todd walks the lot,” said Shane Cohea, director of Safety and Security. “He walks the lot so he can be more thorough and see things that you wouldn’t see from a vehicle.”

Todd used every resource available to Security to figure out who the card belonged to, scanning through Security footage, employee listings and other Security databases, but had no luck. The only information he had to use was what he could read in the card. It was a card from someone named Richard thanking Harriet for her tribute to his late wife, Annette’s, service.

By a miraculous stroke of luck, Todd brought the story up to his son’s mother-in-law, who happened to know a Richard who was married to an Annette who had recently passed. Richard was the principal at a school she worked at and Annette went to her church. This gave Todd a strong lead on who the card may have belonged to and it turned out to be the rightful owner. To make the story even more interesting, Annette was in the care of Norman Regional before her passing. Richard even wrote a letter expressing how impressed he was not only by the care his wife received, but also to have the same determined efforts when security sought to return his card.

“My wife, Annette, spent her last days at the HealthPlex in 2019 and the care and love she received from the ICU staff was a blessing for her and our family. I’m happy to know that dedication towards the families that visit the hospital is just as prevalent in the Security Department,” Richard wrote in the letter.

The story had a happy resolution because of blind chance, but it wouldn’t have been possible if it weren’t for Todd deciding to do the right thing and return the card and money that day.

However, Todd explained how it’s his “mom’s way,” a reference to the way he was raised to conduct himself. In both cases, it shows how doing the right thing can cause positive chain reactions. It also shows how the actions of one employee can lift up the entire organization in the visitor’s eyes.

Stay Informed about Your Health