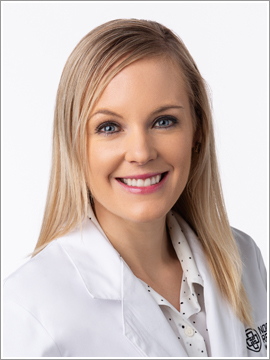 Registered dietitian Ashley Carreon, MS, RDN, LD, has specialized in bariatrics since 2016 and came on board with Journey Clinic in 2018. Educating and encouraging people to meet their health goals has truly been one her greatest accomplishments.

Ashley was born and raised in the quaint town of Tipton, Iowa, located just 30 minutes east of Iowa City. From a young age, she knew she wanted to become a dietitian because of her love for food, cooking, and wellness. Ashley was an active child, participating in sports, music, and 4-H. She showed sheep at the county and state levels and has especially fond memories of the Iowa State Fair.

Ashley attended the University of Nebraska on a track and field scholarship. She chose Nebraska for both its athletic success and nutrition curriculum (Yes, she bleeds Husker red!). While at Nebraska, Ashley was a conference champion, school record holder, and All American. She was also awarded the 2012 University of Nebraska Female Student-Athlete of the Year award for her athletic and academic achievements.

During her senior season at Nebraska, Ashley was an Olympic Trials qualifier in the 800 and 1500 meters. She furthered her education at the University of Nebraska, receiving her Masters of Science Degree in Nutrition and Health Sciences in 2014. Ashley’s graduate research for the iCook 4-H program was published in the March, 2016 issue of Appetite.

Ashley completed her dietetic internship at The University of Oklahoma Health Sciences Center in September, 2015 and has lived in Oklahoma ever since. Surprisingly, she greatly prefers Oklahoma weather over the blustery Midwest winters she experienced growing up.

Ashley enjoys competitive running and has won the Oklahoma City Memorial Half Marathon multiple times. She also enjoys hiking, shopping, trying new foods and traveling with her husband, Jazz, all over the United States and abroad.